All but one of the biggest Grammy awards went to men, and artists like Pink and Halsey are not OK with the response from the president of the Recording Academy.
USA TODAY 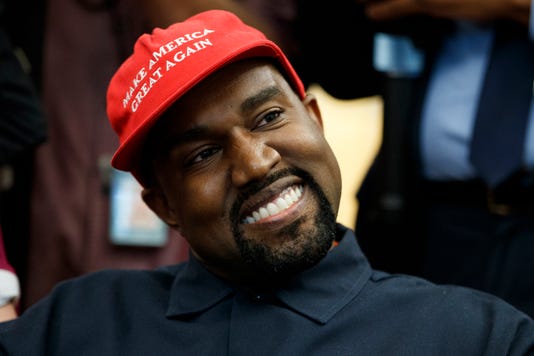 Rapper Kanye West smiles as he listens to a question from a reporter during a meeting in the Oval Office. West has taken a lot of heat for his support of Donald Trump and wearing his MAGA cap. Today, West remarked the cap made him feel like Superman.(Photo: EVAN VUCCI/AP)

Albums that underperformed. Concerts that deserved a do-over. Trends that disappointed listeners.

Not every major musical moment of 2018 hit its mark this year, from the several notable releases that weren’t as revelatory as expected – featuring Kanye West, Beyonce and more of music’s biggest names – to the disappointing charts and radio demographics that fans hoped, in vain, would improve from 2017.

In retrospect, 2018’s year in music was disappointing from the get-go, with January’s Grammy Awards extinguishing any hopes that the dinosaur of a music institution had evolved into a forward-thinking awards show. The diverse slate of Grammy nominees had fans thinking that, perhaps, the Recording Academy was adapting to the times and was ready to recognize hip-hop or Spanish-language music with wins in the night’s three major categories.

That didn’t happen. Bruno Mars swept the album, record and song of the year categories, snubbing more critically acclaimed nominees like Kendrick Lamar. Even more insulting were Grammys president Neil Portnow after the show, saying that female artists – who were nominated for barely any televised awards during the ceremony – needed to work harder to gain equal footing in the industry and that the show didn’t have time to feature a performance by Lorde, the only woman nominated for album of the year.

More: ‘Music’s biggest night’? The 2018 Grammys were an out-of-touch embarrassment

Timberlake needed a win with his halftime performance at the 2018 Super Bowl. His album “Man of the Woods,” released the week before the show, was rebuked by critics; rumors that Timberlake was going to bring out a Prince hologram to the Super Bowl’s Minneapolis arena were criticized by the late singer’s fans; and his famously disastrous appearance at Janet Jackson’s 1994 halftime performance made the stakes that much higher for his own show.

Alas, things could’ve gone better for Timberlake that fateful Sunday night. Sound problems plagued his performance;  his Prince tribute – and questionable camouflage suit – drew jeers from social media; and the headlines the next day were dominated by the child he wrangled in the audience to take a cellphone video with him. And the actual songs he played, as well as any of his performance’s other big flashy moments, are lost to memory.

It wasn’t just “Ye,” Kanye West’s seven-song album from June, that landed with a thud. West’s album wasn’t just supposed to be the return of a king – it was part of a multi-album rollout from West’s G.O.O.D. Music label, alongside new releases from Pusha-T, Nas, Teyana Taylor and the much-anticipated reunion of West with his friend and collaborator Kid Cudi. And while Pusha’s “Daytona” release arrived on time and was praised by critics, the same couldn’t be said for the other albums in the series, which either dropped hours or days behind schedule, were panned by reviewers, or both.

But “Ye” was a particular kind of disappointment, the first Kanye West album that truly felt dead on arrival, failing to produce any successful singles or produce any meaningful commentary. Perhaps that’s why West scheduled another album release for November, with his album “Yandhi” – another delayed release – finally expected to arrive on Black Friday.

More: Is Kanye West still a creative genius? Not on ‘Ye,’ his misguided new album

Beyonce and Jay-Z’s “The Carters” collaboration

It’s become near-anathema to say anything publicly negative about Queen Bey and her creative endeavors. And yet “The Carters,” Beyonce and Jay-Z’s album that arrived by surprise in June on the heels of their On The Run II tour, didn’t make quite the splash of Beyonce’s previous releases.

Despite largely positive reviews from critics and a reasonably successful single, “Ape****,” “The Carters” never quite reached “Lemonade” levels of cultural conversation – perhaps, to give the Carters some credit, because it wasn’t intended to be a powerhouse release at the level of Bey’s solo albums. Still, it’s strange that, looking back on 2018 in review, an event as seemingly major as a new Beyonce release didn’t move the needle in the year’s cultural conversations.

Last year wasn’t great for country fans hoping to hear their favorite women on the genre’s radio stations; 2017 featured the lowest percentage of female artists on the radio since 1994. The conversation about female voices on country radio has been a major topic in Nashville since 2015’s infamous “Tomatogate” controversy, in which a radio consultant named Keith Hill, reacting to research showing the low percentage of women on country radio, said that female artists were the “tomatoes of our salad” and that men were the lettuce.

Three years later, and statistics haven’t improved much for women on country radio. h new Statistics released in June showed that the percentage of purely female country songs charted on the radio by Country Aircheck dropped to 10.4 last year, down from 13 percent in 2016.

Among the voices in Nashville reacting with frustration at the statistics was Maren Morris, the Grammy-winning singer hailed as one of the genre’s brightest new stars. “Enough ‘women don’t want to hear other women,’ or ‘women don’t test well with ballads,’ or ‘singles from new women artists aren’t reacting,'” she tweeted, naming other female country artists that she felt deserved more radio play. “Look at RaeLynn, look at Cassadee Pope, look at Lindsay Ell. Women that kick (butt), write and play, and deserve power rotation.”

More: 3 years after ‘Tomatogate,’ there are even fewer women on country radio