‘Imagine’ is Ariana Grande’s steamy follow-up to ‘Thank U, Next’

Grande dropped the new song “Imagine” Friday at midnight, which is not a cover of 1971 John Lennon classic, though it shares its name.

A link has been sent to your friend’s email address.

A link has been posted to your Facebook feed.

While accepting the prestigious Billboard Woman of the Year award, Ariana Grande got emotional talking about the whirlwind year 2018 has been.
USA TODAY 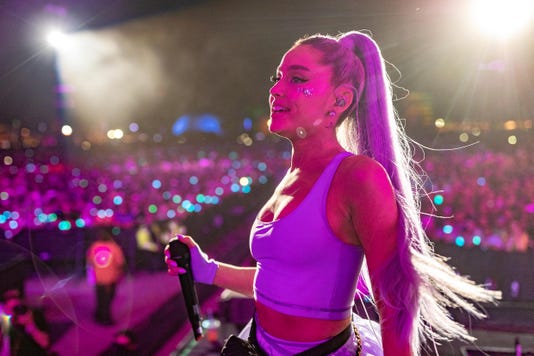 Ariana Grande currently has the No. 1 song in the country with “Thank U, Next,” but that’s not stopping her from releasing another surprise single.

Grande dropped the new song “Imagine” Friday at midnight, which is not a cover of 1971 John Lennon classic, though it shares its name. Grande’s “Imagine” is the second new single from her forthcoming album, which she’s said will be called “Thank U, Next” and feature 13 songs.

While “Thank U, Next” celebrated being single, “Imagine” sees Grande dreaming about a relationship that’s private and low-key, unfolding where the cameras can’t see: “Staying up all night, order me pad thai / Then we gon’ sleep ‘til noon / Me with no makeup, you in the bathtub / Bubbles and bubbly, ooh / This is a pleasure, feel like we never act this regular.”

“A lot of this album mourns failed yet important, beautiful relationships in my life (as well as celebrates growth/exploring new independence),” Grande wrote about the song on her Instagram Stories Friday. “But for those of you asking about ‘Imagine’: I would say if ‘Thank U, Next’ = acceptance… ‘Imagine’ = denial. Hope that makes sense.”

Ariana Grande, Grammys disagree on why she won’t perform