Cardi B announces she and her husband Offset have split up; “Black Panther,” “A Star Is Born” and “Mary Poppins Returns” among the American Film Institute’s top 10 films of the year; Kevin Hart to host the 2019 Academy Awards. (Dec. 5)
AP 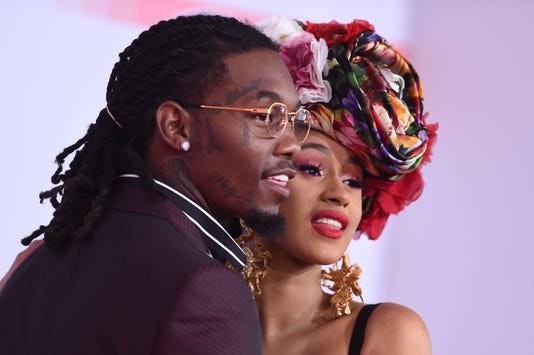 Rapper Offset is missing Cardi B, and he’s sharing his feelings on social media.

It’s possible that Cardi’s performance on Saturday night had her ex all up in his feelings. Videos show Cardi B remixing her lyrics to “MotorSport” onstage at Z100’s Jingle Ball concert in New York.

But it seems like Cardi is looking at the bright side of the situation, saying: “People fall in love, people get married, people have kids. I don’t regret anything because at the end of the day, I have my daughter, and she’s beautiful, gorgeous, funny. I love her. … I ain’t really know nothing much from the music industry and, you know, my husband helped me. He made me wiser.”

The couple has been letting things play out on social media since their public split. On Wednesday, Cardi introduced her daughter Kulture to the world on Instagram, the same day she announced she was no longer in a relationship with husband Offset.

The “I Like It” rapper shared a picture of their baby, Kulture Kiari Cephus, sitting in a car seat, revealing her daughter’s face for the first time since she was born on July 10.

She captioned the picture, “My heart.”

Kulture’s photographic debut came the same night a woman linked to Offset issued a tearful apology for coming between the couple, who are calling it quits after a year of marriage.

“I have not messed with Offset since he’s had his baby,” model Summer Bunni claimed in an emotional video statement to TMZ. “I didn’t know how serious this marriage was. A lot of girls would just deal with this situation and just be like, ‘Yo, I’m the reason they’re getting a divorce.’ ”

She added, “I feel ashamed. It’s a lot, but just coming from me and to Cardi B and to our fans, to her family to her situation, these were never my intentions and I never wanted to break up a happy home.”

In her own (since-deleted) video announcing the split, Cardi said that she and the Migos rapper had been trying to make their relationship work, to no avail.

“So everybody been bugging me and everything and you know I’ve been trying to work things out with my baby father for a hot minute now,” Cardi said.

“We are really good friends and we are really good business partners, you know, he’s always somebody that I run to to talk to, and we got a lot of love for each other but things just haven’t been working out between us for a long time.”

“It’s nobody fault. I guess we just grew out of love, but we are not together anymore. I don’t know it might take time to get a divorce and I’m going to always have a lot of love for him because he is my daughter’s father,” Cardi added.

Cardi and Offset secretly married in September 2017 before the Migos rapper proposed to her in October, offering her a giant ring while onstage during Power 99 radio’s Powerhouse concert in Philadelphia.